Club legend Katrina Gordon spoke to the ‘Why Exercise?‘ podcast about her time playing gaelic football, covering everything from how she got involved to how she fell in love with the sport!

The St. Patricks Day Parade was covered by Sydsvenskan, and you can find the online version here. 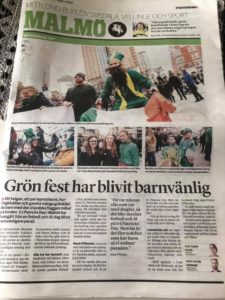 The ladies’ team, with help from the LGFA, hosted a training session by Lizzy Kent, who travelled from Wexford to hold a coaching session with the ladies of Malmö, Copenhagen, Aarhus and Gothenburg. This was covered by ladiesgaelic.ie.

Prior to St. Patricks Day, Hallå came to indoor training to see what it’s all about: 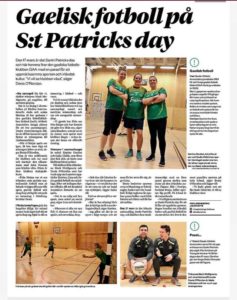 The club features in Joe.ie’s Around the World in 80 Clubs.

Sydsvenskan mentioned GAA in a feature on international sports in Malmö.

With the Eurovision taking place in Malmö, Austrian TV station ORF came for a look as Ireland’s Ryan Dolan and Austria’s Natália Kelly tried their hand at Gaelic Football. Check out the video on our facebook.

In November 2012, GAA Mania swept through Southern Sweden as Malmö headed for the European champions, with Sydsvenskan running not one but two features on the club, one after winning the Nordic Championship, and another after following up to reign supreme over Europe.

As Malmö GAA started to grow, The Local helped to spread the word.